How do you tell your children – four precious children under the age of 11 – that their dad has died? That he has taken his life because he could no longer cope with the physical and mental torment that had become his reality?

That was the impossible question Angela Brient asked herself in the wake of the shocking passing of her beloved husband, Terry: a proud RAAF Sergeant who devoted 22 years of his life in service to this country.

Angela describes Terry as “…an absolutely devoted father” and “the most even-tempered man around”. He was, she says, someone who loved a laugh, and who would welcome people into his circle with open arms.

“That was Terry”, Angela says with pride. “No one had a bad word to say about him.”

They met when Angela had just finished Year 12 and was preparing to move to New Zealand to study medicine at University. Terry, then a Leading Aircraftman, was a Communications Electronics Technician with the RAAF 1CCS Squadron, based at Richmond in Sydney.

After a 12-month long distance relationship, Angela moved to Sydney to take up university studies in Advanced Biology. Just two weeks later, Terry left Australia for his first deployment to East Timor. It was a frightening time for Angela, who did not know if he would return, or if he would come home bearing the scars of war.

Deployment would interrupt the couple again months after they married in Perth in 2004 when Terry was again deployed to the Middle East. Angela would later discover that she had been two weeks pregnant with their first child when she tearfully farewelled her husband on that deployment. 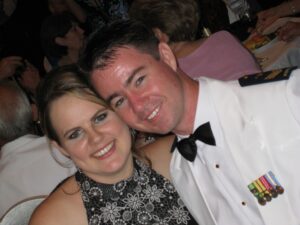 The couple’s first born, Logan, would be joined over the next four years by Hannah, Conner and Annabelle.

Like so many Defence Force families, Angela, Terry and their children moved often: from Perth, it was on to Canberra, then Sydney, Malaysia, Darwin and finally Adelaide.

It was from Adelaide that Terry left on his third and final deployment on Australia Day 2016.

Tragically, while on his third deployment, Terry suffered a severe injury to his neck and spine. Angela struggles to talk about what followed. “The Terry who came back in June 2016 was a different person to the Terry who left,” is as best as she can explain it.

“He was quite incapacitated due to his injury. He could walk – with difficulty – but was in constant pain. He couldn’t even hug the kids because it hurt. It was just so demoralising for him.”

It was not just the spinal injury that was causing Terry so much grief. “Other things were definitely getting harder,” Angela recalls. “Things he had witnessed on that last deployment – those memories triggered depression. I would say he was in torment.” On 31 July 2017, this courageous member of the Australian Defence Force took his life.

“Those first five or six months were just a blur,” she says with brutal honesty. “I mean, I know what happened, but I don’t remember how I felt. I lost 16 kilos in two or three months…”

I honestly don’t know what I would have done without Legacy during that time.

It was just a matter of weeks after the family lost Terry that Angela was first put in touch with Legacy.

Over the coming months, as he remains today, Angela’s Legatee, Steve, was by the family’s side: ensuring that Legacy helped to ease the burden wherever we could. Helping Angela claim her rightful entitlements. Offering constant family support. Helping the children on their road to healing through Legacy Children’s Camps.

Angela describes Steve as ‘a Godsend’.

Help us support Aussie Families just like this by making an online.